The import of goby from the north and South America is rare, so I think a possibility that your goby is Sicydium genus is low.

I think one kind of Sicyoputerus genera, but the ID is unclear like usual.
The similar kind from Indonesia is on the scene recently in Japan. 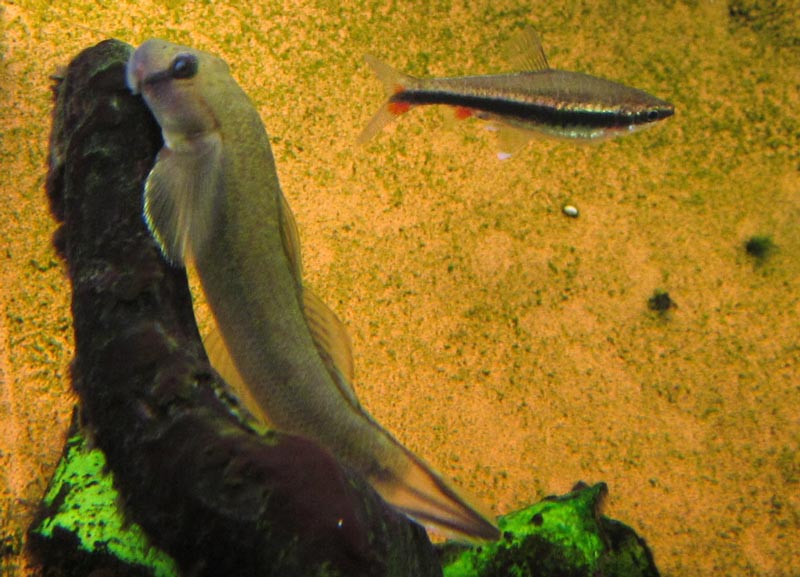 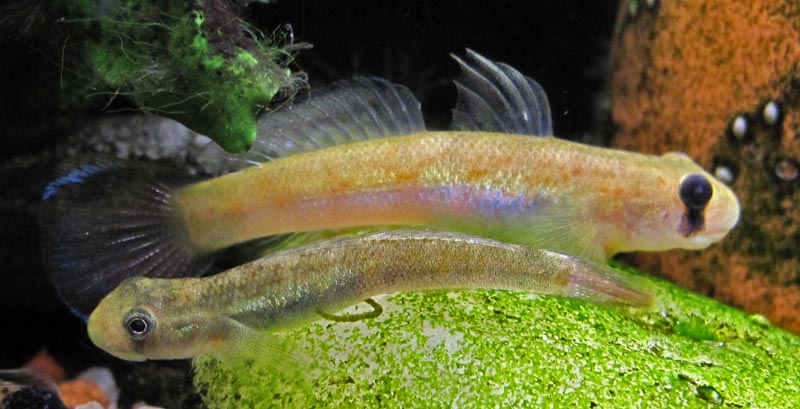 Thank you for the pictures, they look great.

The store meant, mine were imported from Myanmar. I googled some from there, and googled much in general, what I found was partially contradicting pictures... and they change their appearance instantly too (even during reaching for the camera). They look most like Sicyopterus lagocephalus, but I am uncertain regarding the discribtion.

could be any other too, like Sicyopterus cynocephalus, I don’t care, I love them anyway, these are cool and interesting chaps. They are my substitute for mudskippers.

To be more precise I would need to check the number of branched rays in the second dorsal fin, the color pattern of the body and fins, the number and shape of the premaxillary teeth, and the size, shape and number of scales on the nape, abdomen and the caudal peduncle... too much work, need more time and patience and a better microscope.

In the following picturtes I tried to capture a few different looks of the 9(10) fish, I guess they are all the same though.

One smaller one (and still a bit skinny) died after the 3rd „ich“ treatmeant, with really high temperature this time. I saw that appearance of dead fish is described, perhaps that helps to define (?). It shows little red in the fins and a black&white ornament in general. Only once I saw onother alive with similar colours, so I was scared it would die soon, but it’s still with me (I lowered the temperature right away though).

Here the dead one (I checked it only roughly, and found no divider in the throat (Stiphodon appeared to me to have one), their little backwards bent teeth also are differently arranged as on Stiphodon. I notized something (almost) like a tounge (thickned area). Specially the lower jaw has a completely different design as Stiphodon, who’s lower jars appears more like a simple kind of a triangular. The Siciopterus one comes closer to a trout (very symbolically spoken).

the live one with similar colours as above (seen only once)

This view works good to check for ich

I hope that is a dead ich-spot (I bought a new bottle of the sera.stuff, that claims to be able to kill „ich“ inside the cyst too).

one side if the q-tank

The pseudogastro’s took the heat well, so far

Here some yellow and blue could be spotted (if one wanted to) on the Sicyo. The colours turned out for only very short, on some specimen, during the waterchange and mixing the somewhat lower temperature.

WOw! Those fish are amazing. I love Gobies. Thanks for posting pictures.
Top

About S.japonicus, I introduced their video clip doing climbing a waterfall before .
http://www.youtube.com/watch?v=kfMBgiXGxg0 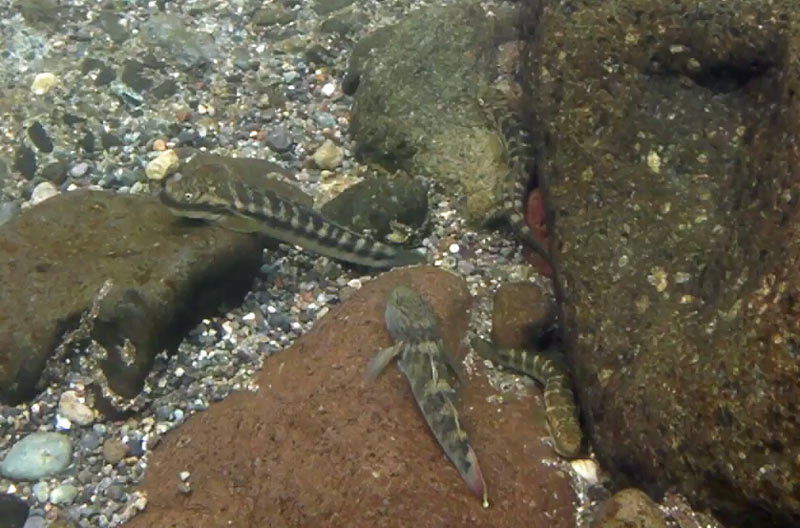 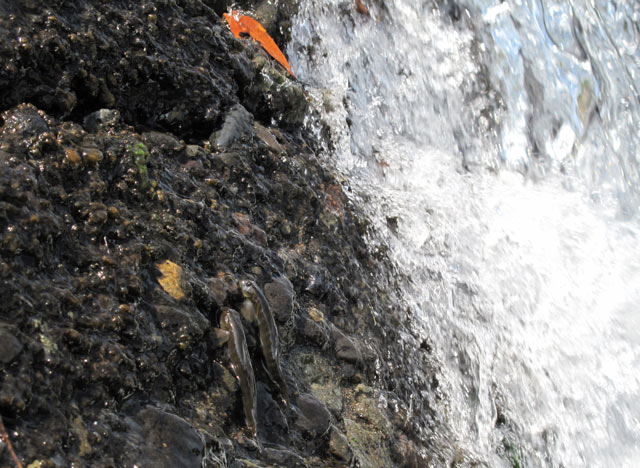 S.lagocephalus is only in the warm most south in Japan, but their distribution seems so wide that I'm surprised.
They range from an African Reunion island near Madagascar to Japan and Fiji according to the following study.

Pictures of Japanese S.lagocephalus I got.
That's still a young individual. 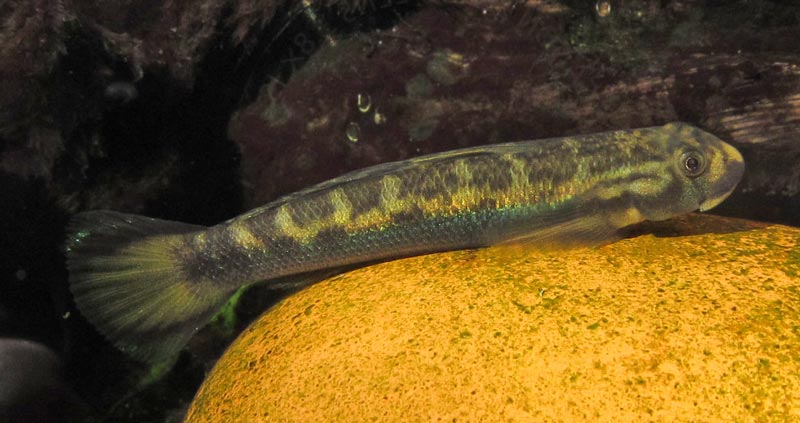 This individual became quite big 5 years later. The big one.
The small one is Sicyoputerus.sp from Indonesia. 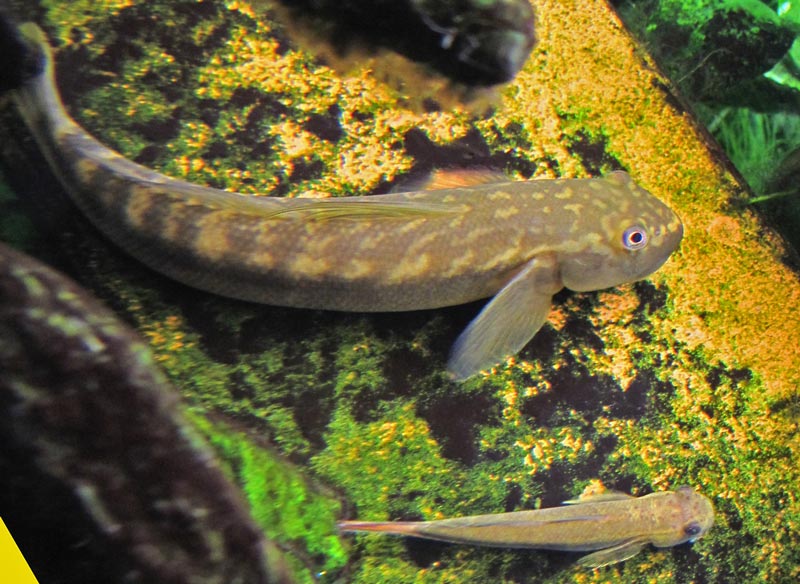 Sicyoputerus.sp (Azure from Indonesia)
They were sold as an azure bonze goby from Indonesia.
I think Sicyopterus macrostetholepis or S.lagocephalus or the related species, but it isn't certain. 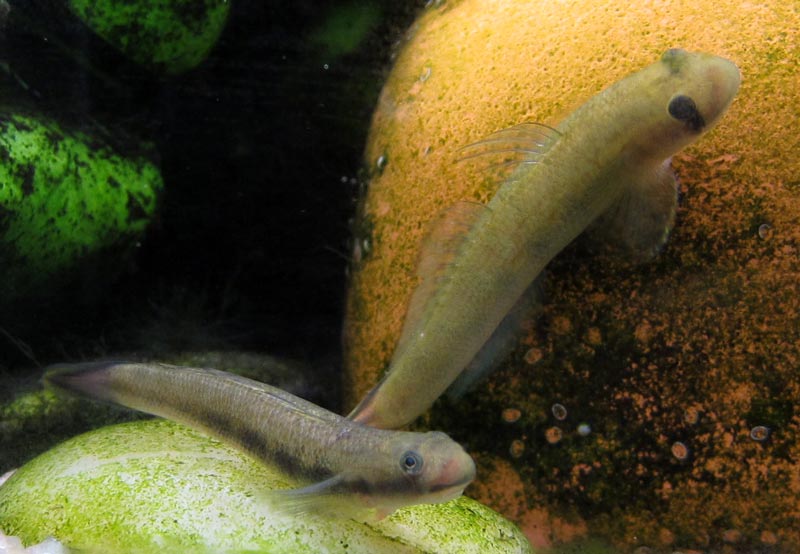 The individual that was keeping before.
It's unclear whether it's the same species as Sicyoputerus.sp above-mentioned.

Thank you so much for your amazing article with all the links and many pictures which I would never be able to find. I enjoyed it a lot.
Naturally I know all your videos, also your stunning waterfall climbing. There will be the day, I may create a little waterfall in an up-side-down tank (hanging from thze top into a tank), spraying against one side with a little pump. But that will not happen in near future.

I looked also into sicydium, as I am still learning and found an interesting paper, showing differentiation methods between sicyopterus and sicydium. One thing amongst others, seems to be the clefts (slots) in the upper lip. If I understood right it looks like sicydium shows the lateral cleft at the rear base of themouth, while sicyopterus shows them to the left and right, about the middle of themouth. Please see top of page 4(195) Fig.2 – charactaristic „b“

Here a picture of one of mine showing thecenter cleft and the lateral clefts (close to right top corner, left bottom)

The first 2 lower front teeth (see charactaristic „i“ in Fig.2) are straight up, bent backwards with one pointed tips. That also indicates rather sicyopterus in my case.
Wolfram
Top

I have no experience of distinction of such subtle species, so I can't advise well.
Species under Sicydium and distributed.
http://fishbase.sinica.edu.tw/nomenclat ... s=Sicydium
Sicydium seems distributed over the Atlantic coast and the North and the South America continent west coast. 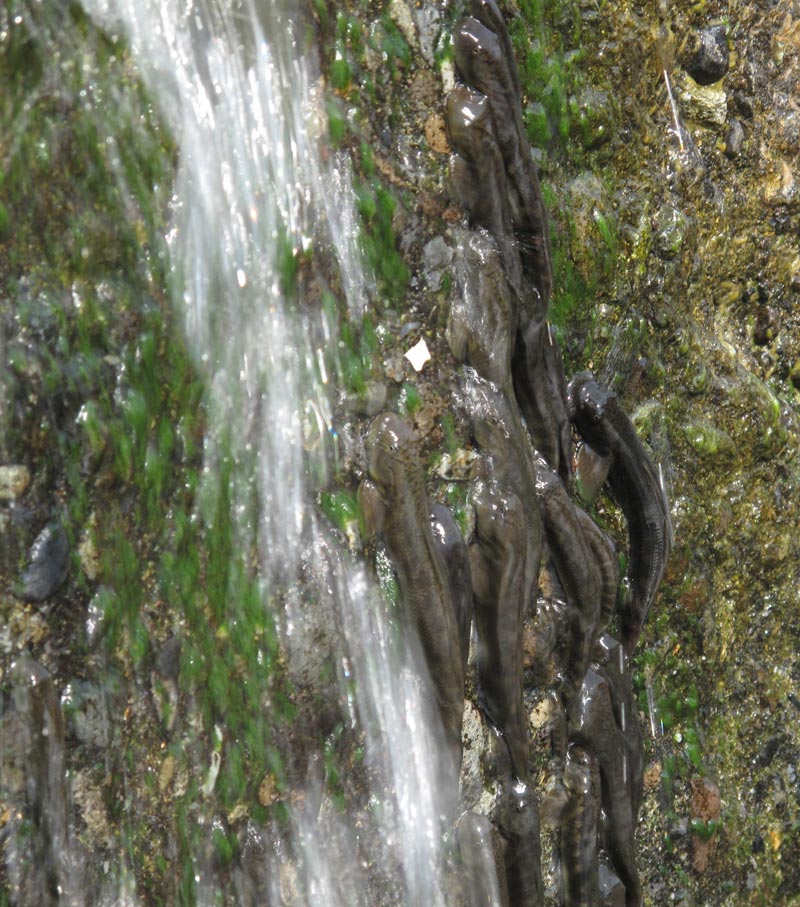 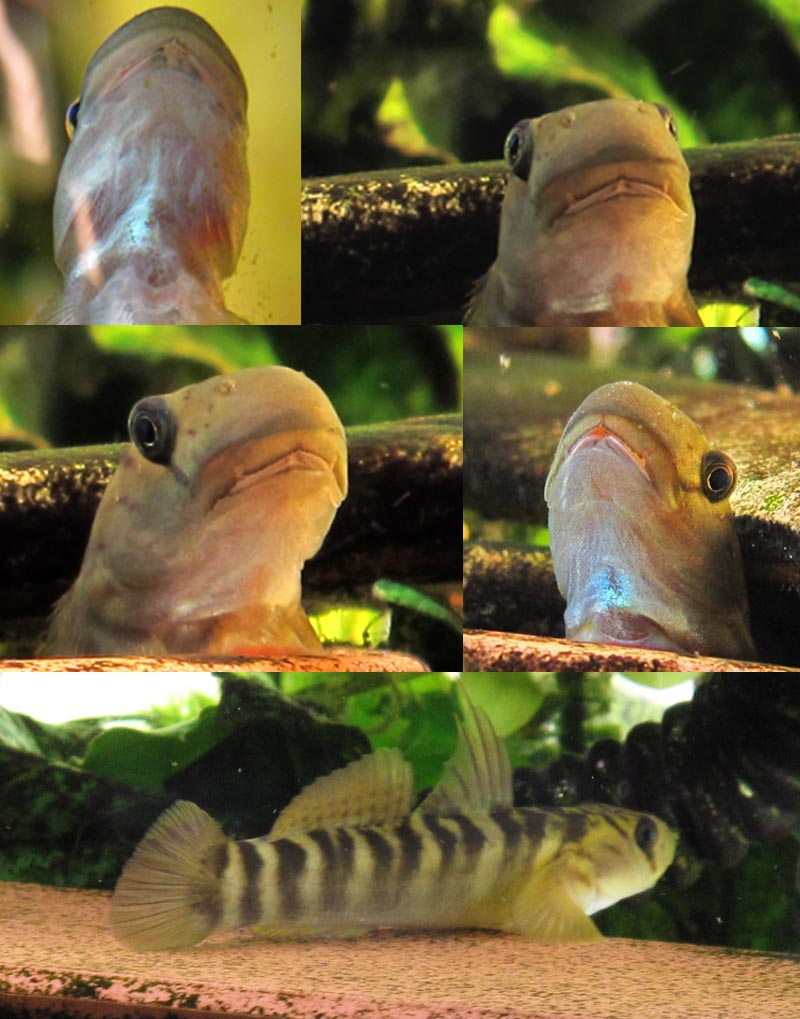 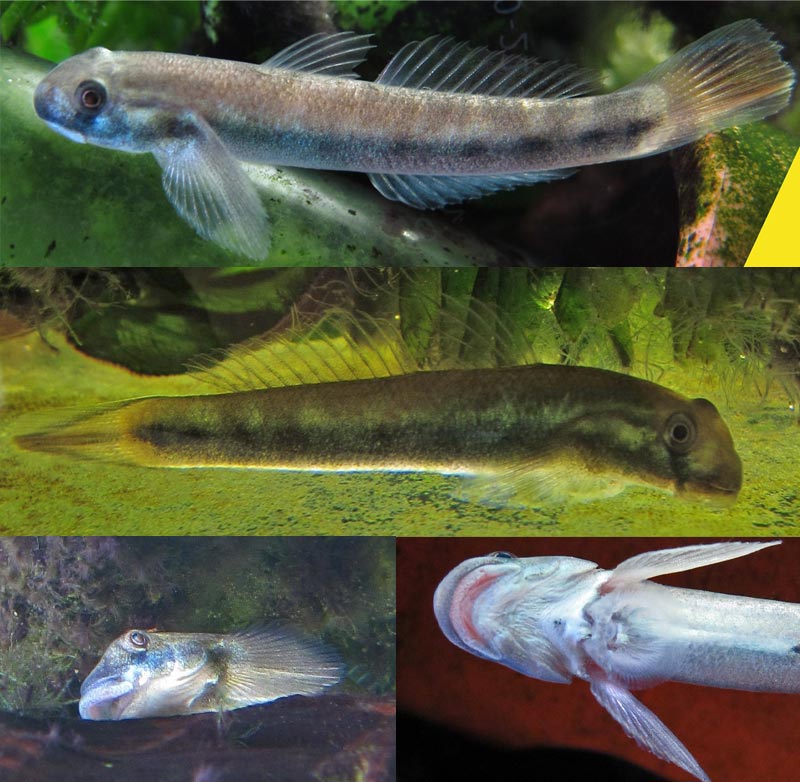 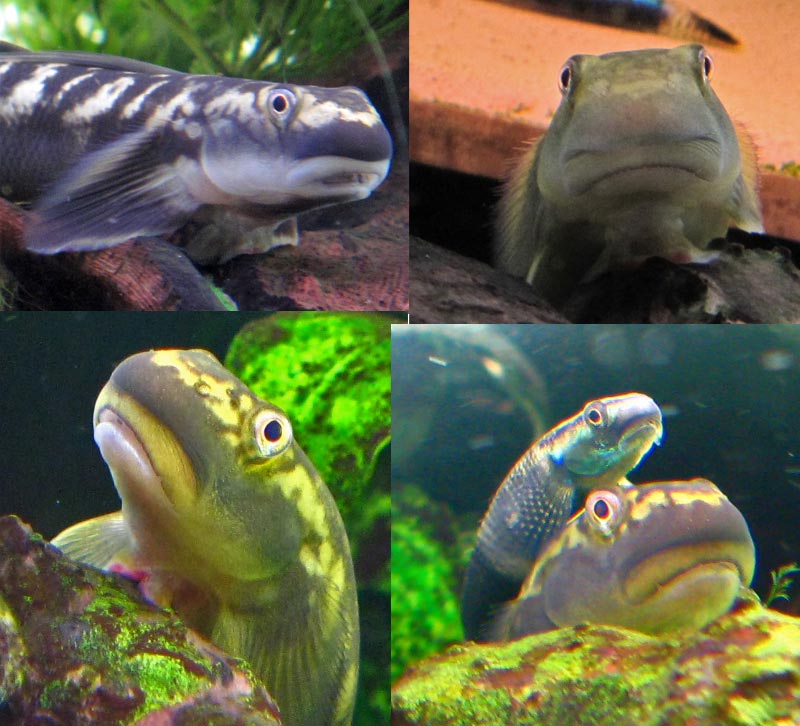 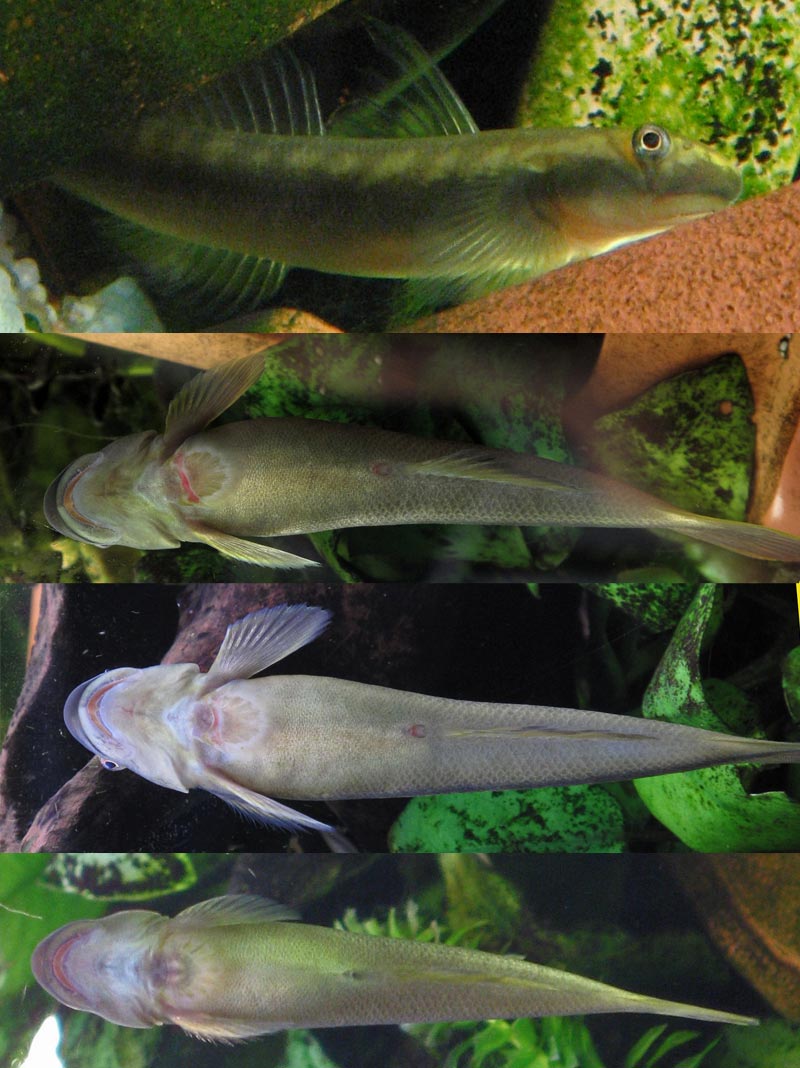 Sicyoputerus.sp (sold as Azure from Indonesia) 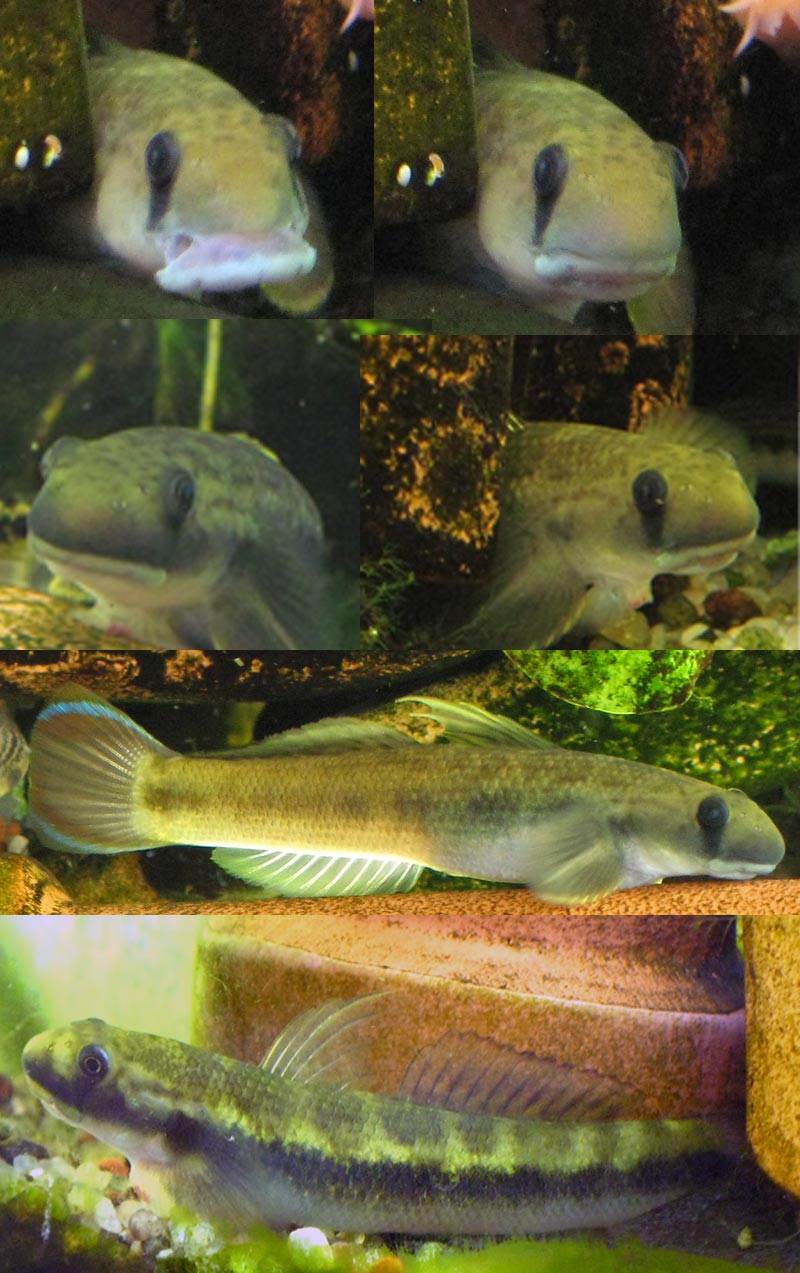 You may notice already.
The paper by which you showed is the one that a present Japan emperor wrote before accession.
In fact, he is also an ichthyologist specialized in the goby.
He released more than 30 scientific articles about goby.
http://www.kunaicho.go.jp/okotoba/01/ro ... hiran.html
An exhibition about diversity of goby was held as an emperor's ascension to the throne 20th anniversary commemoration event recently. 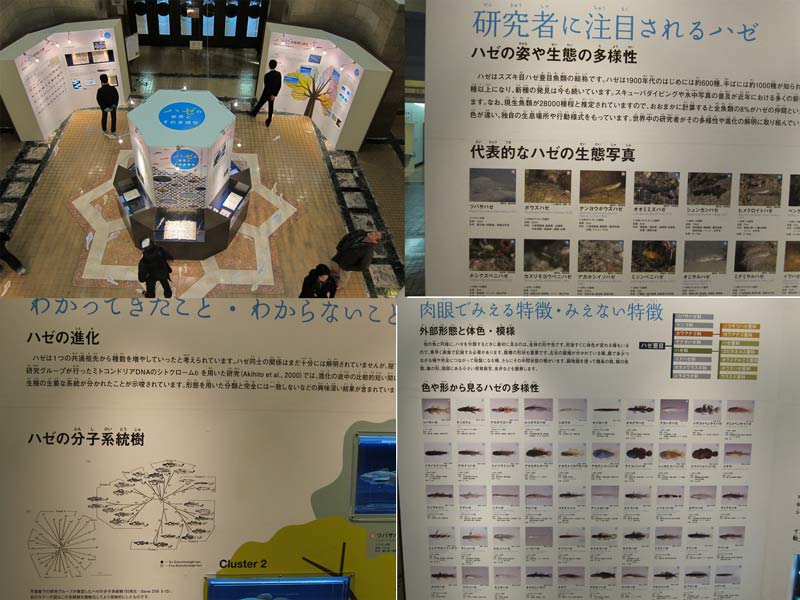 What a beautiful species these are...
BROOKLYN
Top

My babies eat nauplie artemias and phytoplancton , powder and pellets that I give to parents.

I have not challenged their artificial propagation, so I can't advise well.

If the goby is Sicyopterus lagocephalus really, it's amphidromous migration.
After the fry born by fresh water fell in a sea once, and was let run, it goes upstream a river again.
Therefore it's necessary to control the salinity most suitably.
I think the optimum control requirement is still unclear.
I think the example of success in goby of amphidromous migration is very little.

It may be better to consult artificial propagation method of Amano Shrimp.
I am not used to English. Therefore,It is likely to sometimes misunderstand it.
Top

thank you my friend , what solution amano shrimp ?

your are link for solution amano shrimp , please

do not know the species of my fish

You have an idea of my species fish ?

I have not challenged propagation of fish of amphidromous migration.
Therefore it isn't detailed at all.

Thank you, I'll check out the store to see how he wholesaler who sold the fish.

And after seeing what exporter sold the fish to see what species were sold.
Top

tyrano34 wrote: your are link for solution amano shrimp , please

If your native language is indeed French then you might find this article useful: